Establishing balance is central to overall well-being. Recently I had the opportunity to visit the Euphoria Retreat in Mystras, Greece. Little did I know that a Grecian retreat was just what I needed to re-establish balance in my life.

Hiding at the foothills of Mount Taygetos, the Euphoria Retreat lies within a dense forest. Pine trees surround the wellness resort. The Grecian landscape is carpeted with citrus, pomegranate and olive groves.

Fun fact: Mount Taygetos is located in the city-state of Sparta, which is famously cited in Homer’s Odyssey.

The History of Mystras, Greece

Mystras became a UNESCO World Heritage site in 1989. It is the last significant stronghold of the Byzantine Empire. Sitting on the edge of Mystras is the Euphoria Retreat. This retreat is the leading Grecian wellness resort. The Euphoria Retreat prides itself in combining rich history, innovation and spirituality. Cutting-edge science and Grecian architecture are the two building blocks of this beautiful wellness resort.

The World of Ancient Therapies

Euphoria is defined as “a feeling of well-being or elation” (Merriam-Webster Dictionary). The Euphoria Retreat was aptly named by ex-banker and resort founder, Marina Efraimoglou. The ex-banker’s brush with cancer led her to explore another world. This “other” world is full of ancient therapies. Chinese Medicine, holistic medicine and traditional Greek healing are the primary practices of Efraimoglou’s ancient therapies.

Euphoria (noun): a feeling of well-being or elation.

QUOTE: Euphoria (noun): a feeling of well-being or elation.

In essence, the Euphoria Retreat is a place to restore and rebalance. Efraimoglou was deeply inspired by the twin powers of ancient Hellenic and Chinese philosophies and practices. The Euphoria Retreat specializes in helping their guests tackle personal issues, restore balance, and endow emotional clarity.

The elegant curves, arches and domes at the Euphoria Retreat promote Grecian architecture. They lend a real softness to the stone. Along with the surrounding elements is a soothing palette of muted golds, deep reds and soft grays. The strategy of color is a notable quality.

According to Ajay Jain, an interior design blogger, “warm tones, such as red, orange and yellow energize a space, and consequently its occupants. Cool tones like green, blue and purple provide a relaxed, serene air to space” (The Importance of Colour in Interior Design). What’s more is that color also impacts human psychology.

Color Psychology is best understood as the study of how certain colors impact the human mind and behavior(s). Color psychology is a (fairly) recent phenomena. Sir Isaac Newton’s research on light and prisms in 1666 inspired color psychology.

As early as antiquity, people have used colors as a healing method. This practice is known as chromotherapy.

The Architecture at The Euphoria Retreat

The architecture at the Euphoria Retreat creates a gentle, almost monastic ambiance throughout the 45 guest rooms.

The superbly designed circular spa rises from underground. The purpose in this design owes to the belief that the body heals better when closer to the earth. The spa is spread across four floors connected via a stairwell. Spiraling upwards from the black-pebbled Kneipp pool to the blue skies above, the stairwell is reminiscent of yoga’s Kundalini energy. Kundalini energy swirls from root to crown of the head. Resulting in activation of our shakti energy that rises and empowers us.

Hours can be spent wallowing in the steam of the Byzantine hammam, floating in the domed ethereal hydrotherapy pool, clearing internal congestion in the salt cave or simply being in the cozy relaxation area.

The surrounding land was blessed by healers and the grounding energy is ever-present so meditation comes easy at Euphoria, as does the comprehensive menu of massage, facials and bodywork treatments delivered by the resident team of warm and highly-skilled therapists.

Morning hikes (of varying abilities) exploring the ancient land (with an added hint of  Greek history for good measure) offer the best start to the day while biking through the countryside or the pine-scented forest, peppered with hammocks strung over the branches for aerial yoga sessions, is also popular, as is daily yoga, sound healing or other mind-movement sessions.

While some guests visit Euphoria for a spa break, most opt for one of the all-inclusive programs on offer, from Detox, Weight Loss and Fitness (Spartan Adventure style bounding up and down the steps of a classical amphitheater nearby), to Immunity Reset, Emotional and Physical transformation and the signature science-powered Nutrigenomics Retreat, pioneered by renowned Greek doctor George Leon.

Here the focus is heavily on metabolic medicine, 3GL in particular, a patented protocol that measures what is believed to be the three most important biomarkers for metabolic and cellular health in the body: Glycogen, glucose and glutathione.

Based on the results of a simple pinprick test, food, exercise and lifestyle recommendations are customized to rebalance wayward metabolism and energy levels and basically reboot the system at the cellular level.

As with the best retreat destinations, food is a cornerstone of therapy and for guests partaking in specific programs the Mediterranean-inspired meals are prepared in accordance with 3GL recommendations to support the body.

In essence, this means plates (and snacks) overflowing with colorful antioxidant-rich vegetables and meat, chicken, fish and grains to keep our cells vibrantly healthy.

Think Traditional Greek moussaka, quinoa salads, mushroom risottos and delicious home-prepared soups (although Greek salads, which to me ooze the best of Mediterranean cuisine, could be more plentiful).

While my stay at Euphoria Retreat was brief, in addition to excellent hands-on massages and Five Elements energy healing sessions, I was fortunate to experience the 3GL nutrition and respiratory function tests.

Thankfully, I am quite healthy overall and although a few small tweaks were in order, including reducing my overall carbohydrate intake to enhance my energy levels and making time for stillness and space in my day.

For me, it’s the fusion of the traditional Greek and Chinese modalities of healing that sets Euphoria Retreat apart.

To the ancient Greek philosophers, life was a joyful, sensual journey of growth and discovery, while the early Chinese wisdom holders were essentially cartographers, observing the seasonal nuances of nature and how they impact health and balance in the body.

This marriage is so needed in our world now. Learning more about Chinese Medicine’s Five Elements is always a pleasure and Marina along with her associate Mary Vandorou were always on point as they seamlessly entwine both in one delightfully neat package of treatments, science and ancient Peloponnese history, weaved into a 21st-century storyline.

I’m predominantly wood, I am told, which makes sense as I have long had an affinity for trees.  I am eager for growth and creativity, but quick to frustration when my metal element has its way! Yet here lies my motivation, so it is needed, in balance of course.

“Wood is the child of water and it holds my dreams and talents,” she tells me, advising more stillness during my day, so my dreams can flow more freely.

It’s about letting go and lightness does come easily here, as the poet Mary Oliver captures so perfectly in When Among the Trees:  “Like trees we are here to go easy, to be light and to shine.”

We believe that travel has the power to change lives. The power to revive, rejuvenate and redirect the inner self. That’s why we’re here. Take an online staycation with us. Change how you think about travel and let us make it easier for you to search, discover, and book wellness and active vacations. But we don’t stop there. We are with you every step of the way—before, during and after your journey—to make sure you enjoy the most meaningful vacation ever. It’s Travel That Moves You. 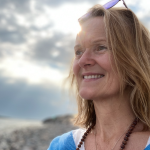 Born and educated in Galway, Ireland, Kate combines an Honours degree in science and postgraduate qualifications in dietetics and cosmetic science with close to 30 years of wellness industry knowledge and experience. After 20 years in Asia, she returned to Ireland with her husband and 3 young children and continues to pursue her passion by consulting, interviewing and reviewing natural skincare, wellness destinations and leading experts worldwide. She is founding Judge of the annual Asia Spa Awards and a finalist for the UK Fragrance Foundation Jasmine Award 2019. She has written 9 books and continues to write with lifestyle magazines worldwide.